Hey guys, your book Dynasties – The Franchises That Made American Sports History was published just over a week ago, but the idea to make it comes from a little further afield. Do you want to tell us how it all began and, above all, why?

Giorgio Barbarchi: “It all started during one of the lunches Dave and I periodically organized to chat about sports with the stars and stripes.

Usually half the time I listen to him complain about how bad his favorite franchises, the Rockets and Redskin…er Commanders are, while I bully myself about how great it is to cheer for Luka Doncic’s team. On that day, Dave appeared with the phrase: What if you and I wrote a book about American sports?

I immediately thought it was a great idea, but we need to include other people in the project as well. Partly to break the work down into smaller pieces, because we have families and jobs that leave not a lot of time to write about our passion, but also because it was nice to be able to share the satisfaction of publishing a book with some who have worked with us for many years on the pages of Play.it USA” . 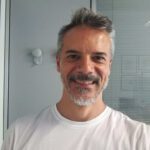 David Lavara: The idea for the book started a long time ago. In addition to the friendship that undoubtedly binds me and Giorgio, there is mutual respect.

This prompted him to ask me to correct the Buffalo Bills chapter in his book You have to know how to loseFor me it was an honor. Then other lunches passed together, and one day I threw them in there. I would like to write a book with you.

The topic was too broad and many perks to cover were not my purview, so we immediately created a team and ideas. “

Giorgio, I’ve taken care of the two chapters for the Los Angeles Lakers and the San Antonio Spurs. Dave, I chose the San Francisco 49ers and the Dallas Cowboys instead. Tell us the reason for these choices.

Giorgio Barbarchi: “Indeed, my choice was a choice we can define as ‘remaining’, meaning that I left Andrea Cassini, as a (much) better writer than me, and the right of first refusal in the two stories he would have preferred to say. But I am especially happy to have stayed at Tottenham: as a fan of The Maves for many years, I hated and scared them, but over time I learned to respect and admire them for how they were able to stay at the top of the NBA for more than twenty years, thanks to a sporting culture with little peer on the world stage.”

David Lavara: “I chose the Niners and Cowboys because I experienced their winning times first-hand. I watched NFL highlights on Tele+ and black and white games without sound on Ederle Barracks, the NATO base we have in Vicenza. It was like seeing something unknown and therefore curious. Like picking up an extra ground signal. I’ve seen almost everything I’ve talked about, and even if they’re not the teams I support, I’ve spoken with both passion and love.

I enjoyed researching old stuff, loved remembering and reviewing certain games from the ’90s, where among other things the teams I wrote about were major rivals. I’m proud to have written about Dallas, because as a Washington fan it hasn’t been easy to speak out loud about Enemy No.”

The book contains 16 short stories and 4 “dynasties” for each of the greatest American professional leagues: the NBA, NFL, MLB, and NHL. Which of these 16 stories surprised you the most and why?

Giorgio Barbarchi: “Having dealt with the review of the entire project, I was able/had to go and document in depth all sixteen stories, so now I can say I know them pretty well. But if someone made me want to read more, this is the Edmonton Oilers story by Wayne. Grezky.Grezky was The Great One, Michael Jordan of the ice, and is still considered the absolute reference point today.His legendary personality has left an indelible mark on hockey fans, and personally I am always curious to know the many sides, good but sometimes less Quality, for those who changed the history of sports forever.”

See also  A new event is coming to Fortnite

David Lavara: “I was inevitably shocked by the separation from the Dodgers, because I’ve been following them since the ’90s even though I’m not particularly passionate about baseball. I like their colors, I love their logo, and I was fascinated by reading and deepening the transport from Brooklyn to Los Angeles, two American places I love. They called both The two coasts are home, which is a really unique case for the US as well. Then reading names like Robinson, Snider, and Koufax gives me goosebumps at the legendary aura they carry.”

Finally, the question of questions: Has this book really succeeded in explaining the mystery of the dynasties, the common thread that unites Michael Jordan to Tom Brady, and from Babe Ruth to Wayne Gretzky, characters that seem so far away in time and with such different personalities?

Giorgio Barbarchi: “Gosh, I’m not sure that such an ambitious goal can be achieved with a book, let alone ours. What we did was try to recount, in a limited number of pages, how and why these great dynasties were able to overcome the limits of time in a competitive context like American sport , hoping to leave readers with a desire to delve into stories that may need a lot more space to be told more fully.

But I can say one thing: Despite the great names you mention and the names of all the great champions who have made fortunes for their teams, I believe the difference in the medium to long term is a breeze of the culture and values ​​that franchises are built upon and developed. Because, in my humble way of seeing and quoting former Chicago Bulls general manager Jerry Krause’s words, “Players don’t win championships, organizations do.”

David Lavara: “Great champions certainly make a difference when it counts, or else they wouldn’t be great. The thread that connects dynasties in different eras is more closely connected to the constructive manner of the team than is one in my opinion. Not to mention all the episodes without which a particular streak of victories would not have been possible. Jordan is certainly paramount to the successes of the Bulls, but without the support team built around him it would have been limited.

The Spurs dynasty would not have begun without the first overall pick in 1997. The 49ers won with two legendary midfielders in two different decades because that was important to structure and longevity. We have many examples of how proper and wise franchise management can only lead to success. Patriots docet”.

Max JordanWatching the NBA since 1989, surfing the internet since 1996. Play.it USA was born from a desire to combine the two passions and bring together in one “virtual” place with many American sports fans in Italy. Email: [email protected]