Space for people, planet and prosperity. This is the title of the second edition ofG20 Space Economy Leaders Meeting”, organized at the headquarters of the Italian Space Agency, in the presence of the Minister of Technological Innovation and Digital Transformation, responsible for space and aeronautical activities, Vittorio Colao, head of the Italian Space Agency (ASI), Giorgio Sacucciaand heads of space agencies of the G-20 countries and major international space organizations.

construction “Space Economy Leaders MeetingIt was born under the Saudi presidency of the G20 last year and represents a unique opportunity to add relevance and strategic importance to the themes already chosen by the Italian presidency: people, planet, prosperity. These are the topics on which the capabilities supporting space technologies and systems are clearly expressed, making space a unique sector in support of the goals of the Italian G20 Presidency.

We believe that space activities will play a major role in the coming years in strengthening the foundations of the three pillars of the G20: People, Planet, Prosperity. That is why this year’s meeting of the G-20 Leaders for the Space Economy was an ideal opportunity to raise the level of interest in the role that space and the “space economy” can provide for the goals of the G-20 and the future of our society. The G20 countries can act as space ambassadors also for developing and emerging countries that may not yet have the opportunity to grasp the potential of this sector to build a sustainable future – the ASI President declared, Giorgio Sacuccia.

See also  The Chinese space station is ready in 2022 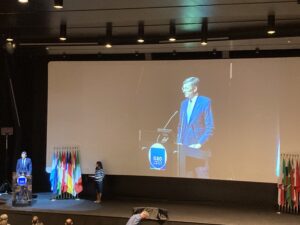 The meeting, which was held in a mixed mode, partly and partly remotely, was an opportunity to discuss future projects and scenarios in the sector, in a context in which space is considered an important economic resource for the prosperity of mankind. Space resources are increasingly linked to critical areas, such as communications, transportation, health, agriculture, the environment, and climate, paving the way for a wide range of new industries and markets, resulting in increased jobs, opportunities, and better standards of life in the country. countries around the world.

Among the main points of the meeting, special emphasis was placed on climate change and sustainable development projects favored by space technologies and applications also in view of the upcoming meeting. COP26 Co-chaired by Italy and the United Kingdom.

At the end of the meeting, the representatives of the heads of the 20 agencies wanted to launch a challenge and raise awareness among the G20 community about the importance of the space economy’s contribution to the global economy by adopting three recommendations, a message that will reach the G20 Summit of Heads of State and Government that will be held in Rome at the end of October.

Present at the headquarters of the Italian Space Agency, heads of agencies: France (CNES), Germany (DLR), Russia (ROSCOSMOS), Saudi Arabia (SSC), Turkey (TUA) and the United Kingdom (UKSA). In addition, the Director of the United Nations Office for Space Affairs (UNOOSA), Simonetta Di Pippo, Director General of the European Space Agency (ESA), Joseph Asbacher, President of the International Astronautical Federation (IAF), Pascal Ehrenfriend, and Executive Director of the Gell Advisory Board participated Space (SGAC), David Petrillo. Representatives of other space agencies from the G20, the European Commission and the OECD Space Forum participated in the communication.

See also  The evolution of the scene, scientists discovered how to find life on Mars