Thanks to the publishing house we had the opportunity to take part in a meeting with the authors dedicated to the press, during which they talked about how they worked on this project.

Katya Centomo – “7 Crimes” is a seven-volume series and comes from a strange idea: using the narration tool to present a legal vision different from the usual, intriguing, and capable of opening a door to a dimension that may be considered distant and cold, but is in fact essential to understanding our culture and society’s thinking. In each volume there is a stand-alone story, drawn by a different author, but which forms a broader plot.

We didn’t want to create something educational, but we wanted to use storyboards to their fullest potential, they are entertainment, fun and ironic. Each crime is represented in an extreme way, with cases pushed to the limit. The second part of the volume instead offers experts the possibility to use history sharing for a more technical, serious but never boring analysis of crime. In each volume there are at least two designers, from those who made 64 tables to those who drew much less, but we will have names like Bruno Canucciari, Bruno Brindisi and many other surprises.

The “Seven Crimes” also feature the crazy freedom left to the designers, the interpreters had no stylistic bets, in “The Fraud” you find Marco Caselli who has manga and American influences. In number 2, you will see Mauro de Luca, who has a more classic style, no connection to the aesthetics of the previous record.

Emmanuel Scarita – We begin with a just technical definition of the crime that we take into account in this matter. We must start from that, the definition given by the Penal Code, and explain it in simple terms. The stories you will read next are contradictory, they are at odds with what is commonly happening.

Daniel Calori – For years now I have not known rest, and adding too much meat to the fire would mean doing poorly, and I could not bear it; However, we have found an equation for which I will not draw all the openings, but I will deal with the first and the last, so as to close the circle. 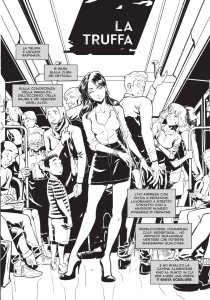 Marco Caselli – Katya and Emmanuel sent me two test boards, I attracted them excited and hesitant, because I had not been making comics in years, I work as an artist in comics, they are two professions with their differences. The boards were very popular and it was a pleasure working with this team, and we also felt a lot of support and love for the project from the publisher.

In this episode we talk more about the fraud than the fraud and in a way reminded me of the manga. I’m a great reader of Japanese comics and it’s amazing how Japanese authors manage to get you to follow a sports manga for a sport you would never have counted. Happened to me with volleyball, I found myself watching the anime “Haykyu!!” And since that day I follow the national team, I know all the rules … They have this ability and awareness for which they say “let’s not talk about volleyball, let’s talk about volleyball players, the feelings behind this sport, fatigue, love” and do it It makes you passionate. “7 Crimes” does the same thing: it does not talk about fraud in a heavy and instructive way, but about the people who live it, the scammer and scammers.

During the meeting we were able to ask a question to the authors.

In the past ten years, comics have established themselves among the shelves of various libraries, and I am convinced that the next step can be to reach school desks, both in terms of imagination but also through educational and entertainment projects. In recent years we have seen a huge project like Comics & Science and this volume made me believe that 7 Crimes could be something similar to law; I studied it in high school and hated it, but this comedian might impress some students and possibly direct them toward criminology studies.
When you thought of the miniseries, did you have a specific goal in mind?

centomo Our goal was diverse, we wanted to interest comic book fans, those who follow crime series on Netflix, those who read detective stories, but obviously we also thought about school. We originally thought about academia, and I was afraid it would be hard to attract high school, but we actually found interested parties.

Sciarretta The criminal trial in Italy takes place in a different way than in the United States, which you are used to seeing in the movies. My first aim was to show how the trial actually takes place in Italy: for example, the lawyer and the public prosecutor did not use the word “objection” but “I dissent”, in a very formal way. It may sound silly, but when I see the experiments in Italian films where “objection” is used, I raise my nose a little. The teachings in “7 Crimes” can reach children and the elderly alike. Law consists of a series of rules that govern reality; It may sound boring, but the moment we connect it to what happens to us every day, it becomes fun.

horses I would like to mention the case of Corpuccino, by the late Tono Pettinato, which was adopted as a supplementary text for criminology courses at the University. Then I make my contribution as a high school teacher: often, year after year, we try to renew the old-fashioned front-facing teaching of the nineteenth century thanks to new strategies and new media, to capture the interest of new generations. 14-19 year olds have continuous use of stories through smartphones, computers and television; It is not excluded that it is possible to launch this spring with the inclusion of comics as well, either in the school library or as a study text.

See also  Marcuzzi and the unscrupulous Canalis on vacation: It's a challenge to sensuality