The government of the State of Israel approved new restrictions last night to contain the spread of the Covid-19 pandemic and does not rule out the possibility of a new shutdown in September. According to the Israeli newspaper Jerusalem Post From Sunday, August 8, masks will be mandatory again at all outdoor meetings and the green corridor will be necessary in all public places without exception. In addition, parents looking after minors under the age of 12 who have tested positive for the virus despite having already received the vaccine or recovered from Covid-19 will be quarantined. Government offices will return to work at a 50% rate of smart work and the private sector will be encouraged to do the same. Finally, stricter criteria will be put in place to discourage travel abroad or from countries at risk.

Unexpected pressure in a country that has vaccinated the bulk of the population and is beginning to administer the controversial third dose: 142,000 have received more than 60 new booster vaccines. However, the infection data is worrying: On August 2, Israel recorded more than 3,800 new cases in the past 24 hours out of 113,723 swabs, the highest number since the beginning of March. In addition, with ten deaths recorded on Sunday, August 1 and seven more the following day, Israel recorded the highest number of deaths within 48 hours in four months. 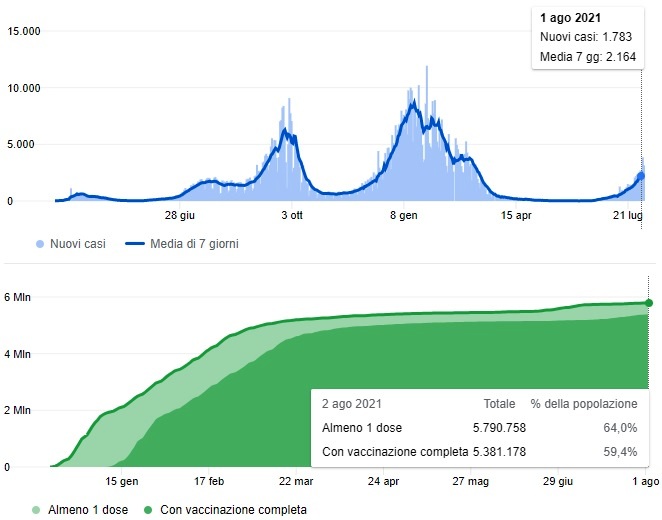 Prime Minister Naftali Bennett justified the new rules by the need to control the spread of the delta variant: “Avoid crowds and vaccination now. Otherwise, there will be no choice but to impose stricter restrictions, including a new one. Serrata,” he said. “We must prepare the population and public opinion for a new shutdown in September, a month in which the economic damage will be less,” Defense Minister Benny Gantz declared, referring to the period of Jewish holidays.

The third dose and the whole green lane

The government’s goal is to ensure that everyone who needs it can have the possibility to vaccinate themselves with the third dose which, as Prime Minister Bennett explains, “simply recharges the body’s defenses and allows us to save lives.” To accompany the government’s plan and try to avoid a general shutdown, a scheme will be implemented Green Passage which from August 20th will not exclude even children under 12 years old.