traditional ski raceVialatea golden egg The 952 young skiers who took part on April 3 on the slopes of Sestriere watched, from first to last for all, a chocolate egg.

After a two-year hiatus due to the pandemic, the 39th edition of the Vialattea Golden Egg was held on Sunday 3 April in Sestriere.

Boys and Students competitions have been cancelled

Originally split into two days, to avoid crowding, the event underwent a change due to heavy snowfall on Friday which prevented performance of the Saturday program for both boys and students categories. For them, the date with the Golden Egg was postponed for another year.

Taking to the stage the youngsters were the athletes belonging to the Pulcini classes (born 2010 to 2015) who on Sunday 3 April drove the 39th edition of the Golden Egg, the traditional giant slalom that concludes the competitive season on the slopes of Vialatia.

The race began on three tracks simultaneously, each to suit the age of the contestants, and the 952 climbed onto the track to compete for the coveted trophy. Beautiful sunny day, winter temperatures, perfect snow and perfect conditions from all points of view, I accompanied the descendants of athletes from all over Italy and also from abroad with representatives from France, Spain and the UK. 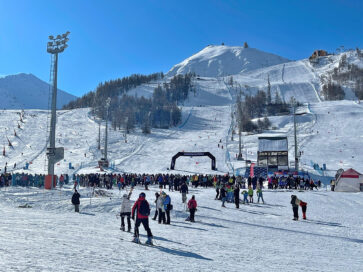 Thanks from the mayor

“As a municipal administration – explained Sestriere Mayor Gianni Poncet who spoke to reward the young winners in this category – we are really excited about this Sports Day. Seeing these children ice skating indicates that the future of Italian skating is promising, as there will be new champions who will be able to deservedly replace our big names in both women and men. Special thanks go to Vialattea, Gualtiero Brasso and his staff at Sporting Club Sestrieres, for organizing the event which attracted many young people from ski clubs from all over Italy and abroad to Sestriere. The hope is that we will meet again next year at the 40th edition of the Golden Egg, receiving the best of times.”

Easter egg for everyone

According to tradition, at the end of the competition, all participants received a classic chocolate egg as a beautiful prediction of Easter.

Sansicario Cesana Skating Club won the 39th Golden Egg with a score of 274, and has already won three consecutive editions in 2015, 2016 and 2017. The defending champion was Sci Club Sestriere, who was ranked first in the last two editions of 2018-2019. The place of honor for the Cescarelli Golden Team with a score 240 points, followed by skate club Sauze d’Oulx with a score of 182. The first classified skate club, in addition to the classic trophy, also celebrated winning a giant chocolate egg.

The last week of open slopes

Meanwhile, the last week of the opening of the Vialatia slopes has begun: skiing will be held until Sunday, April 10.