The Italian Space Agency and Argotec have released the first images taken by LICIACube, the only satellite involved in NASA’s Dart Planetary Defense mission. Here are the first historical images taken by the LEIA and LUKE cameras aboard the LICIACube, on the first Italian mission in deep space, during the approach phases in preparation for the flyby, when LICIACube is the only witness to the impact between the DART probe and Dimorphos.

The dramatic shot by the LEIA camera aboard LICIACUbe that reminds us of the historic “Earthrise” taken by William Anders during the Apollo 8 mission.

The stills depict the “developing” land (above) and the Pleiades (below). 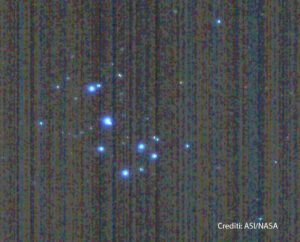 From these pictures a great little record was born. In fact, these are the first images taken by an Italian satellite at a distance of 14 million kilometers. An Italian mission hasn’t gone yet.

LICIACube, ASI’s satellite, built at Argotec Laboratories in Turin, is only at the beginning of its mission. In the next few days, you’ll be preparing for a maneuver you’ve never tried before. ASI and Argotec engineers are ready for the final stages of this historic mission.

The LICIACube project is managed by ASI’s Robotic Exploration Mission Office, with industrial contractor Argotec SrI and a scientific team from the National Institute of Astrophysics, Politecnico di Milano, the University of Bologna, the University of Naples Parthenope, and the Institute of Applied Physics “Nello “Carrara” from the National Research Council (CNR). -IFAC).